On Madness: Understanding the Psychotic Mind

Available from Bloomsbury in paperback, hardback, and e-book
https://www.bloomsbury.com/uk/on-madness-9781350192546/ 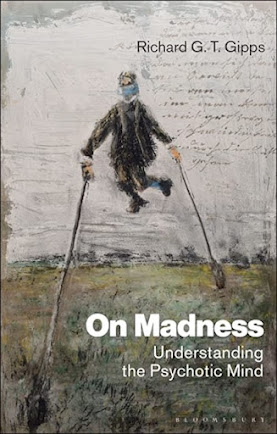 DescriptionCan we reach the psychotic subject in their delusion? Psychopathological theorists often try to find a way to characterise this subject's inner predicament so that their opaque utterances and actions will now rationally hang together. In this pathbreaking work, philosopher and clinical psychologist Richard G. T. Gipps demonstrates how such efforts at rational retrieval actually result in us setting our face against the psychotic subject in their distress.Bringing together patient memoir, psychopathological observation and philosophical thought, Gipps offers a profound alternative. On the one hand he shows how, by appreciating just why we can't locate rational order within psychotic thought, we can better understand what it is to suffer delusion and psychosis. On the other, he recovers for us the value of such expressive, motivational and symbolic forms of understanding as only become available once we've been turned away at reason's door. In such ways Gipps not only solves the psychopathological problem of delusion, but also shows us how to bear a truer witness to the psychotic subject in their brokenness, pain and despair.Table of ContentsIntroduction1. Mental Illness2. Delusion's Rational Irretrievability3. Reality Contact4. A World of One's Own5. The Divided Self6. Self and Other7. Hallucination8. Disordered Thought9. Psychotic Symbolization10. The Politics of Insanity AscriptionReviews"'What is it for a mind to become ill?' In On Madness, Richard Gipps takes us on a richly textured philosophical and psychological journey showing, in a Wittgensteinian spirit, how delusion, as other psychopathological concepts, have their meaning only 'in the stream of life'. A work of philosophical psychopathology which, in resisting the temptation of definition remains firmly grounded in understanding." --Danièle Moyal-Sharrock, President of the British Wittgenstein Society, Professor of Philosophy, University of Hertfordshire, UKGipps’s is a deeply necessary work, because it is the first book of philosophy to take seriously that madness and delusion defy positive definition. For the ground required in order to predicate of the non-sane the kinds of things we can normally take for granted is missing. The desire to say of someone who is suffering the severest forms of strangeness that she thinks such-and-such is typically, Gipps wisely warns us, dangerously over-reaching, running the risk, if doggedly pursued, of being itself a madness of method. This brilliant book retrieves the disturbing, disturbed, difficult reality of psychoses from beneath the layers of motivated metaphysical scientism that have accreted over them. Moreover, Gipps shows how the very failures of the various forms of scientism themselves often take us as close as we can get to understanding the non-sane. -- Rupert Read, Associate Professor of Philosophy, University of East Anglia, UKIn this fascinating meditation, grounded in the thought of Wittgenstein, Richard Gipps argues that an adequate understanding of madness must first recognize the limits, perhaps even the impossibility, of any such understanding. Psychosis for Gipps is like the God of “negative theology”: indescribable and unknowable, approachable only through negation. His subtle critique of psychiatric and psychological concepts nevertheless illuminates many mysteries that are typically obscured by standard forms of explanation and description. -- Louis Sass, Distinguished Professor of Clinical Psychology, Rutgers University, USARichard Gipps has produced a remarkable book that forces us to reconsider the rather easy definitions of madness that we are so easily drawn into, often quite unwittingly. Delusions are not just false beliefs in the house of reason, which might be corrected or easily translated, for reason itself is functioning here in a different way. Gipps has the advantage of being both a clinician and very talented philosopher with a deep understanding of Wittgenstein. This book will appeal both to psychiatrists and psychoanalysts who have an interest in philosophy and to philosophers who will see how examining madness brings fresh new ways of thinking into knowledge, reason and epistemology more generally. -- David Bell, Psychiatrist and Psychoanalyst, Former President British Psychoanalytic Society, UK
Posted by Richard Gipps