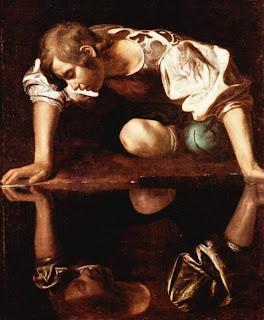 In what follows I shall take just one aspect of narcissism as central: this is the way in which the narcissist’s mind is bent out of shape through their attempting to take themselves as their own object. What I shall claim (in section 5) is that we can use Wittgenstein’s therapeutic attempts to emancipate his inner interlocutor the private linguist to give a clearer characterisation of the logic of narcissism. My hope is that in this way we will come to an understanding of how the illusions and the aspirations of the narcissist are sustained, and also come to a clearer understanding of just why the narcissistic ideal of self-sufficiency must be understood as an illusion.
4. The Private Linguist as Narcissist
Paragraphs 243ff – and especially 258 – of the Philosophical Investigations (PI) are often taken to contain an argument – the ‘private language argument’ – which is supposed to show us how we cannot develop psychological concepts (with terms (‘S’) for sensations, feelings etc.) using purely intrapsychic resources – say by ‘inwardly pointing’ to (quasi-ostensively referencing) our sensations and naming them.
As the secondary literature has it, either there is in the internal world a lack of the requisite ‘stage-setting’ for the quasi-ostensive act in which ‘S’ is to be paired with its referent (eg M McGinn), and/or it can be proved, from the absence of a consequent operational ‘criterion of correctness’ for deploying ‘S’, that the antecedent ostensive act which aimed to make for ‘S’’s normative deployment must have failed (eg Hacker, Glock). This latter interpretation, which takes the absence of a criterion of correctness as a demonstrable conclusion of a (private language) argument has, to my mind, itself conclusively been shown to fail as an argument in recent years (especially Law’s Five Private Language Arguments; also Schroeder).

The outline of this traditional (Hacker, Glock) interpretation goes something like this:

a) We can see that no operable criterion of correctness obtains for the use of 'S' despite the putative inner ostensive act.

b) Such a criterion is however required for the meaningful deployment of 'S'.

c) Therefore no actual ostensive definition can have occurred.
Depending on how it is elaborated, the difficulties said to obtain for the argument usually turn on an implausible implicit verificationism present in the demand that genuine ostensive definitions must result in operational criteria (e.g. samples, charts or measures) for the use of 'S' - or instead in (rather pointlessly) taking for granted what the private linguist is simply unlikely to accept, that criteria of correctness be of necessity publicly available (rather than available only to the private linguist). My purpose in outlining these matters here is not however to enter into a complex interpretative and logical discussion, but rather to provide a foil for the rather different interpretation of PI258ff in what follows.

Here are its broad outlines:

a) The inner world is marked as a non-normative domain, in so far as, of its very nature, there is here no scope for talk of: erroneous or correct inner judgements, a seems right / is right distinction, etc. (The 'Cartesian' idea that error in the inner world is impossible because of the clarity and distinctiveness of the deliverances of inner sense doesn't even get a look in. 'Grammar' (the logic of our concepts) has already taken care of the work of this putative inner faculty.)
b) practices such as ostensive definition, however, aim precisely to introduce or refine the meaning, and make for the normativity, of particular ostensively defined terms ('S').

c) There is therefore no possible place for ostensive definition in the inner.
In what follows the claim will be that the private linguist's resistance to such reminders is of a piece with his narcissism. The fantasy of being able to help oneself to both (i) the grammatically sanctioned certainties of subjective expression and (ii) the epistemic certainties of objective knowledge is, I shall suggest, of the very essence of narcissism itself. Wittgenstein’s struggle against his narcissistic inner voice is a perfect instance both of what is described in PI255: ‘The philosopher’s treatment of a question is like the treatment of an illness’, and of his ‘struggle to be anstandig (decent) … above all, overcoming the temptations presented by his pride and vanity to be dishonest.’ (Monk). The paragraphs following PI243 accordingly – I believe – constitute what in psychoanalysis would be called Wittgenstein’s working through of the narcissistic phantasy structure which pretends that one can reap the benefits of normativity (i.e. objective correctness, genuine empirical knowledge) without sacrificing the benefits of subjectivity (i.e. the inalienable authority of the genuine subject).
258 contains the first voicing of the key argument. The private linguist wants introspectively to define the term ‘S’ by inwardly concentrating on and pointing to a sensation arising within. Wittgenstein replies:


But “I impress it on myself” can only mean: this process brings it about that I remember the connexion right in the future. But in the present case I have no criterion of correctness. One would like to say: whatever is going to seem right to me is right. And that only means that here we can’t talk about ‘right’.


My right hand can write a deed of gift and my left hand a receipt. – But the further practical consequences would not be those of a gift. When the left hand has taken the money from the right, etc., we shall ask: “Well, and what of it?” And the same could be asked if a person had given himself a private definition of a word; I mean, if he has said the word to himself and at the same time has directed his attention to a sensation.

This becomes clearer with an example. We use the words 'real' or 'reality' to make a range of discriminations (real versus fake watches, real versus put-on emotional expressions, 'he behaved like a seargent major but in reality he was a dustman', etc.). There are what we might call the different kinds of reality or existence enjoyed by various phenomena: emotions, occupations, numbers, colours, shapes, physical objects (watches, artworks), money, etc. But if a philosopher comes along and sublimes the concept of 'reality', they may now start asking whether (even what within the local language games we take as paradigms of) smiles or primes or artworks or God or thoughts or colours or values or particules or stories or minds are 'actually real'. What it is to be 'real tout court', as it were, is not explained - and characteristically we are just supposed to intuit how to deploy the term in its decontextualised form.

Here is another example:  In the preface to his Principia, Newton reported that his physics aimed at the goal of determining the 'absolute' movements in space and time of celestial objects. By 'absolute' he means: not relative to a temporal or spatial frame of reference. For example, of a man on a ship, we may ask about the direction and velocity of his movement, but in reporting this we may fail to note that not only is he walking over the deck, but the ship itself is moving over the earth, and the earth is itself moving through space. From this we might (rightly) conclude that questions about motion are necessarily relative to frames of reference. Newton however, having 'sublimed' the concept of movement, (wrongly) takes it that there is a 'true' or 'absolute' movement to be had which is what we get when we take account not only of the man's movement over the ship, but also of the ship and the earth. Similarly when we think about measuring time: it will not do, if we are to follow Newton, to (rightly) stipulate one or another natural oscillation as a temporal frame of reference against which the phenomena of interest to us can be contrasted. Rather we should (wrongly) be able to determine the regularity or absolute duration of such measures themselves. (In order to perform both these moves Newton tacitly and incoherently attributes parts, or rates of flow, to space and time respectively themselves.)

The question remains: What is narcissistic about such acts of sublimation? As I see it there are two related aspects of such metaphysical tendencies to sublimation which betray the theorist's narcissism.

The first concerns the ambition to extract oneself from the world and to understand the phenomena we encounter from without. (The desire for context-transcending abstraction in itself is of course no bad thing - it is an essential component of thinking and theorising per se. What is incoherent however is when, with metaphysical hubris, we attempt to deploy thought outside of any context whatsoever (the 'view from nowhere' as Nagel calls it).

The second concerns the theorist's tacit arrogation to herself of the capacity to hold onto and vouchsafe the meaning and meaningfulness of her theoretical terms despite their being wrenched from those social contexts which (if she would but admit it) constitutively embed their deployment.

The psychological narcissist attempts to nourish themselves with their own love - yet love must always come from without for it to be psychologically transformative or nourishing. The private linguist indulges in the fantasy that he can make do with a subjective form of normativity to ground the meaningful deployment of the terms he introduces for his own use. More generally, the procedures of the philosophical narcissist reveal - in the very asking of his questions - his arrogation to his own mind of functions that can only be performed by socially and materially embedded discursive practices. 'I know what 'real' means all right' he says; 'What I want to know though is whether these [points to some trees which might normally function rather nicely as paradigms of 'real trees'] are real.' The narcissism consists in the tacit belief that one could, purely from within oneself, hold onto a meaning for the word 'real' despite its decontextualisation.
We could view a large part of Wittgenstein’s later philosophy as devoted to the task of persuading us that we do not after all know what we mean when we ask, say, the sceptical questions which beset us. The confident belief that we do know what we mean by our questions, but are just stuck for answers, and so must busy ourselves by ‘working on’ the theory of this or that, is a precondition of much metaphysical philosophy. It might then not be misleading to describe our coming to this ashamed yet therapeutic acknowledgement – that not only our theoretical answers, but even the questions which prompted them, fail to carry the sense we assumed they carried – as a prime intellectual example of that ‘frightful work’ of dismantling ‘the edifice of [our] pride’ (CV 30).[3]
[1] Both CBT and psychoanalysis investigate the irrationalities that lie at the heart of emotional suffering. To simplify greatly: CBT tends to trace the irrationality to inferential mistakes, whereas psychoanalysis views it as motivated by the avoidance of emotional pain. CBT, that is, looks to disturbances of mental, and psychoanalysis to disturbances of personality, functioning to explain environmentally unintelligible emotional distress. Fischer views Wittgenstein as unhelpfully constrained in his understanding of illness and therapy by the then unavailability of today’s cognitive theories of psychopathology. Like many clinicians I tend in my clinical work to use both models where appropriate; in this paper however I start to explore the rich resources of psychoanalysis for developing Wittgenstein’s understanding of philosophical illness and its therapy.
[2] Perverted: per vertere: turning away from what is genuine.
[3] This paper has been greatly improved by helpful comments in particular from Louise Braddock, and also from Sarah Richmond, Jim Hopkins and Edward Harcourt.
Posted by Richard Gipps