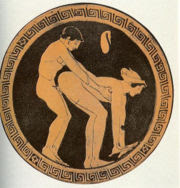 Sometimes it's proposed that psychotherapy is really a form of prostitution. (R D Laing suggested it, for example - as more recently has Rupert Read.) The suggestion, I believe, is usually intended as a criticism of psychotherapy. The force of it derives from the supposedly morally repulsive idea of paying for something - in this case a human relationship - which, just through this very fact of payment, allegedly degrades the character of that - the relationship - which is bought. That 'you can't buy love' is, it could be said in a Wittgensteinian spirit, a 'grammatical' remark about the concept of love. (But then, people don't go to prostitutes for love - they go to them for sex. And they get it.)

In any case, I don't terribly mind being thought of as a prostitute - if that's just what it is to offer psychotherapeutic services. But in fact the comparison seems a little weak to me. For it isn't that one is (impossibly) buying the friendship of the therapist - that is never on the cards. What is rather being bought is a service which, if it goes well, will make possible the establishing, say, of meaningful friendships again - or for the first time - or friendships of a richer quality - by the patient. What is being paid for, then, is a certain kind of relationship of a different order which serves to clear the way for friendships of the usual order.

The good therapist will be boundaried; they will not excuse bad behaviour in the name of psychological distress or trauma. They will 'call' the patient if they act disrespectfully; they will not do them a disservice by letting them 'get away with' dishonourable acts towards the therapist. Yet again, they work to clear a space for regression, they tolerate it to the utmost, they strive to locate the humanity of the patient within or behind his or her hysteria. First regression, then progression anew. Troubles are 'worked through'. Conversations which arouse defensive anxieties and all the difficulties these generate are positively encouraged, made space for. In friendships troubles are shared; therapeutic relationships are designed to (re)establish the embodied conditions of possibility of such sharing.

The patient is an adult who is paying another adult to function in ways akin to a parent. In ways akin to a parent, but also in ways akin to another non-parental adult at the same time. That is the trick of therapy - to pull off both those roles simultaneously. That is what is being paid for. (Perhaps we could even argue that to not pay for therapy would be odd, potentially reducing it to the status of an attentive and oddly asymmetrical adult-adult relationship.)

The sex therapist will sometimes call on the services of a 'surrogate' - i.e. of a person experienced in sex with whom the patient can practice as they develop their confidence in their own sexual performance. Payment here is essential to the meaning of the interaction for the patient. They are buying the surrogate's patience, they are buying their non-intimacy. Unlike the prostitute the surrogate functions as a way-station for someone who is trying to emerge from solitude into an intimacy they find overwhelming. Sexual relationship, and not sexual relationship, at the same time: that is what is being paid for.

I believe it is more accurate to describe my own practice as surrogacy rather than prostitution. The person who visits a prostitute is just getting a quick fix of something to satisfy their immediate desires. I hope I do not function as an emotional palliative for my patients. Sometimes, in fact, the session may be more painful than pleasurable. To function as a therapeutic prostitute would be to engage in giving the patient the temporary illusion of an adult-adult relationship - in other words, to collude with their narcissism - only to leave them just as vulnerable as ever in those real-world encounters from which they will typically shy away. To function as a prostitute would be to try to merely bolster their self-esteem, make them feel better, let them (even despite their better selves) get away with bad behaviour 'because they are paying for it', etc. To function thus is to function anti-therapeutically, and this is the real failure of the 'prostitute' analogy.

To function as a surrogate, however, is to provide something which is explicitly understood as on-the-way to elsewhere - as an inbetween of defence/phantasy and reality, as a stepping stone to real relatedness. That role is not best captured by the literal meaning of 'surrogate' - a mere stand-in for the real-thing, but rather by an appreciation of the surrogate's role in an ongoing, therapeutic, adaptive process.
Posted by Richard Gipps