A hallucination is an absence experienced as a presence. A negative. A 'ghost' if you like. Not a 'perception without an object'; not a perception full stop. Formed by an expectation of a certain sort. Not a conscious expectation. Not an interpretation of experience driven by fear. It's not a matter of taking yourself to see what you merely dread. Not an 'inner experience' or 'inner representation' (since, like, what are those anyway?)  in the absence of an 'outer cause'. (My basic supposition is that once we start to think in terms of inner representations we are guaranteed to never find our way back to reality; correlatively once we start to theorise psychopathology in psychological terms we will never understand the foundations of either mindedness or its diremptions.)

So what kind of expectation is it driven by? Not by a prediction, but by a certain kind of unconscious anticipation. An anticipation that belongs to the lived body rather than to the reflective mind.

I wear a watch but today, after I go swimming, forget to put it back on. I don't normally notice it on my wrist. Yet all afternoon I now seem to feel something where my watch would once have been. It is as if, now it is gone, it is now that I feel the watch on my wrist.

How do we understand that? Well it's surely due to the thwarting of my habituation to the sensations caused by my watch. When I wear it normally I don't have such sensations; the watch becomes incorporated into my body schema, it becomes part of the 'from-where' structure of experience, part of the transcendental subject, rather than an intentional object of its experience. But when it isn't there the neurological feedback loops which normally make for the habituation don't always immediately fully switch off. Instead their continued activation makes for a negative of my watch on my wrist. Just think of those expectations which help us adjust when we get on a moving escalator - and then of how we can lurch, as if it has just moved backwards, when we get on a static escalator. 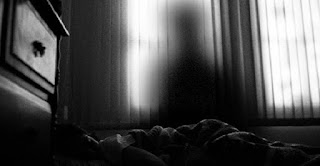 I somehow still expect to see my dead mother. Why? Because I haven't fully mourned her. That is just what a failure of mourning means: it is a failure to feel that pain which is itself the somatic registering of the loss. It is a failure of the lived body to aptly tear itself apart, in the living fabric of its personal anticipations of her company. The lived body cannot yet habituate - I still expect her to come through the door. For a ghost is a failed goodbye.

A ghost is a negative (in the photographic sense - well, in a metaphorical sense of 'in the photographic sense'!) of a perception of a person. It is formed by a failure to cancel an expectation. Just when she would normally have come through the door she doesn't. But my expectations are still extant, and so instead her negative comes through the door. The dead escalator appears to lurch; the dead mother appears in ghostly form. I expect her to be speaking to me, I expect to be speaking to her: the ghost appears to be saying something.

Autoscopies, coenaesthopathies, hallucinations: they all share the same phenomenal structure. They all involve this kind of going-awry of sensori-motor reafference.

Consider Gibson's conception of perception in terms of invariance across transformation. If I understand such theories aright, my perception of the computer is a function of my noticing invariants in the midst of changes in sensory stimulation - as I move my eyes across it, as I move my head and my eyes past it, as my eyes make microscopic and rapid back-and-forth micro-saccades across it. What is there to be seen - what belongs to the constant properties of the object - is what the body cannot account for by way of the sensory alterations induced by its own anticipated movement. (The body's own constancies in self-accounting are of course not just given to it by itself in isolation from its exposure to the constancies of an independent environment; such is the correlativity of subjectivity and objectivity which, perhaps, Merleau-Ponty has best explicated for us.) But we also need to take account of what we can safely call our 'knowledge' of objects: their habits and dispositions and qualities. 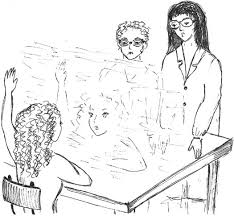 So: perception involves (to risk a rather daft cognitivistic metaphor) the ongoing solving of simultaneous equations with variables including all three of sensory stimulation, bodily (or organ) movement, and sensorimotor anticipation, the relative values of only some of which variables are known at any one time. (But don't worry, I don't think that the brain is really somehow now doing maths; it's a metaphor.) The trick is to find the best ongoing fit. Yes: the perceptual registration of static qualities is itself an essentially diachronic matter. (To know if the thing it's flying up to is static the bat must fling ultrasound at it at time 1 and at time 2 as it approaches. If the second echo is no longer than the first then the object is moving away from it.)

What about UFOs? Of what are they the negative? What here is expected, anticipated? I suggest they are the negative of an experience of disintegration and chaos. Fatigued, overwhelmed, vulnerable, alone, stressed - the fabric of perceptual experience will begin to disintegrate. The UFO, however, with its disc-like singular unity yet lack of structure, with its brightness in the chaotic decay of my experience, provides a binding point within my visual field.

The looming faceless figure at the end of the bed? Well, the point, I think, is that I am the one lying down in the bed, supine, prone, sensorimotorically disenfranchised, observable yet unobserving. Factor in some sleep paralysis and you up the sensorimotor stakes even higher (but manage to sit up and the apparition will go). The negative here works like this: I cannot see, I cannot approach, I cannot control; I am being seen, approached, controlled. Angelic apparitions or succubi invasions, whisperings or voices: our entry to the shadow world of the spirits is our lurching on the now-static escalator of our animal soul.
Posted by Richard Gipps