ian mcgilchrist - a review of a talk

A review of a talk by Iain McGilchrist to the Oxford Psychotherapy Society on 9th Dec 2020 in which he set forth a highly compressed version (“this will be like drinking from a fire hose I imagine”) of key themes from his 2009 work The Master and His Emissary on the divided brain and the making of the western world. 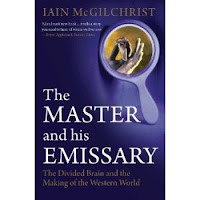 He set the scene by describing how, when working as a fellow in English at All Souls, Oxford, he’d written an earlier book called ‘Against Criticism’ (1982). Because our appreciation of literature is, he argued, utterly particularistic, implicit, contextual and embodied, it’s of little value to subject literary texts to forms of dismantling analysis and explication which end the textual flower by picking it. Having thereby deconstructed his own profession he perhaps rather had to move on - as it happened to medicine, psychiatry and neuroscience. Here too he elaborated his own romantic take on the venerable theme of man’s two natures or souls - the one involved in an implicit, situated, whole-registering, mode of attention and relation, the other in details-oriented, categorising, relationships to the world.
McGilchrist’s thesis has him weaving back and forth between matters of human life and culture on the one hand and matters neurological - especially to do with hemispheric differences - on the other. Research on the brain’s functional asymmetry has not always been considered reputable, he noted, and if we consider the kind of left versus right brain bromides we find on the internet, on self-help and management courses, etc., this would, he said, be a fair assessment. It’s interesting to consider how many of these largely misleading claims we therapists have unwittingly absorbed:

In their place McGilchrist’s scientifically evidenced alternative focused principally on the different forms of attention which the two hemispheres support. Some extracts:

On the neurological side McGilchrist told of how, with his research, he’d set out to answer 3 questions: why do our brains come in two halves?, why are they so sparely interconnected (only 2% of neurones are connected by the corpus callosum, most of which perform inhibitory functions)?, and why are they asymmetric (left hemisphere broader at the back, right at the front)? But more prominent in his talk, and perhaps of more interest to the psychotherapist, were his thoughts on the relation between the different functions of these hemispheres and different forms of personal and cultural life. There was much that was rich in the talk that I shall now just touch on briefly. For example McGilchrist proposed that thought was largely independent of language. It seemed to me, though, that the the criteria for the proper ascription to humans of thoughts of anything above the sort we attribute to animals essentially involve what the person would say or write, or how they would respond to speech or writing, and so I remained unconvinced. (Someone may have a stroke, lose his speech, yet still think - but he had previously learned to speak, and our continuing intelligible ascription to him of thought turns on what he would communicate were he still able so to do.) Also troubling to me was McGilchrist’s constant personalisation of the brain (see the quotes in the above table or, say, ‘As something new is presented to the brain, the right hemisphere becomes very active in trying to understand it and take a grasp of it. But as soon as it becomes familiar to the left hemisphere it pigeonholes it and puts it into a category’). Does this commit the mereological fallacy, I wondered - the fallacy, that is, of attributing to a part of something (the brain) what can only be coherently attributed to the whole (the person)? In the end, though, I thought it is but a harmless and charming metaphor, one meaning something like ‘the right hemisphere is causally necessary for you to understand and take a grasp of something’. But leaving these quibbles aside, the principal topic of interest was, I thought, the question of the different modes of attention enabled by the different sides of the brain, and the forms these take in our cultural and therapeutic lives.
McGilchrist’s own (shall we call them counter-enlightenment or romantic) sympathies were much on display in his take on what ‘would’ happen ‘were’ culture to become dominated by left hemisphere modes of attention. To paraphrase: ‘We’d lose the broader picture. Knowledge would be replaced by information, tokens or representations. Skill, judgement and common sense would be deprecated and replaced by knowledge and inferential rationality. Abstraction, reification, measurability, utility and the kind of algorithms and management styles beloved of bureaucrats would take over. Justice would be reduced to mere equality. The sense of individual uniqueness would be lost as categories and groups take over. Art would become merely conceptual, full of distorted and bizarre perspectives. Language would become diffuse, lacking in concrete referents. Hubris would prevail.’ Clearly he was inviting us to consider that we already live in a left hemisphere-dominant world, rather than the world he - and no doubt many of us - would prefer, which is to say, one sustained by a mode of attention and cultural life deploying both hemispheres but under the general control of the right. (The right here being the ‘master’, the left the ‘emissary’, from the title of his book.) Regarding all of this I, naturally, also cheered. However I found myself with a suspicion that part of my enthusiasm stemmed from an illusion - one in myself, that is, and perhaps in other listeners (I’m not saying it’s McGilchrist’s) - that the data he summarised for us regarding the brain added even an iota of support for this thesis. The thesis - that our world deprecates valuable modes of attention, and vaunts others which, left unconstrained, make our lives banal - stands or falls entirely on its own cultural merits; neuroscience cannot itself pronounce on such matters of value.

What, then, is the value of McGilchrist’s neuropsychological investigation into lateralisation? As psychotherapists we may of course sometimes encounter patients with neurological disorders or injury. For that, however, we shall probably do well to call on an understanding of functional localisation that’s got rather more than 2 categories - left and right - in it! No, the real boon of McGilchrist’s scheme, I suggest, is the way it fine-tunes our attention precisely to the two modes of attention outlined above. How often it is that one such form tacitly asserts itself as dominant when the other is required, to such ill effect! As therapists we’re naturally sometimes aware of when we or our patients can’t see the woods for the trees, perseverate on details, refuse to dwell in uncertainty, and so on. But are we sufficiently aware of how systematic such attentional hijacks can be? And had we considered how easily certain personal and cultural activities and practices may be misunderstood when they’re construed in such terms as only properly articulate quite different practices? To borrow now from Piaget, might we say that forms of attention which are best understood in terms of accommodation (i.e. our receptive openness to reality which helps us bend to its shape by developing new forms of thought) might get wrongly understood in terms of assimilation (i.e. our attempt to place what we encounter within one of our pre-understood categories)? So that, to use a nice pair of concepts offered by McGilchrist, praying now gets assimilated, as it were, to preying? Or, to spell it out: So that a communicative mode characterised by attempts at receptive openness to what’s beyond our control shall be reflectively misapprehended as - and perhaps even corrupted in practice by being turned into - a mode of attention which aims to dictate the terms on which fate shall meet us? This, I thought, was the truest boon of McGilchrist’s schematism, and the fact of the brain’s functional lateralisation but a pleasing sidenote, albeit one which provides a plausible candidate for a causal condition of possibility of our two-souled nature.

Another distinction McGilchrist drew was, à la Martin Buber, between I-Thou and I-It modes of relating. If I understood him rightly, the former - involving as it does an openness to another in his or her particularity, rather than a mode of attention that allocates him or her to a type - belongs with our right hemisphere functions, the latter with the left. These reflections do not, to my recollection, occur in his The Master and his Emissary. Perhaps they will find their place in the 1500(!) page sequel he informed us he’s written. At the end of his talk a particularly striking phrase concerning the former was left ringing round one or both or my hemispheres. McGilchrist attributed it to the rather obscure 1930s French existentialist Louis Lavelle: ‘La charité est une pure attention à l’existence d’autrui’ (‘Love is a pure attention to the existence of the other.’) As a dictum for capturing something essential to the ethic of true therapeutic listening, I think we could do rather worse.
Posted by Richard Gipps