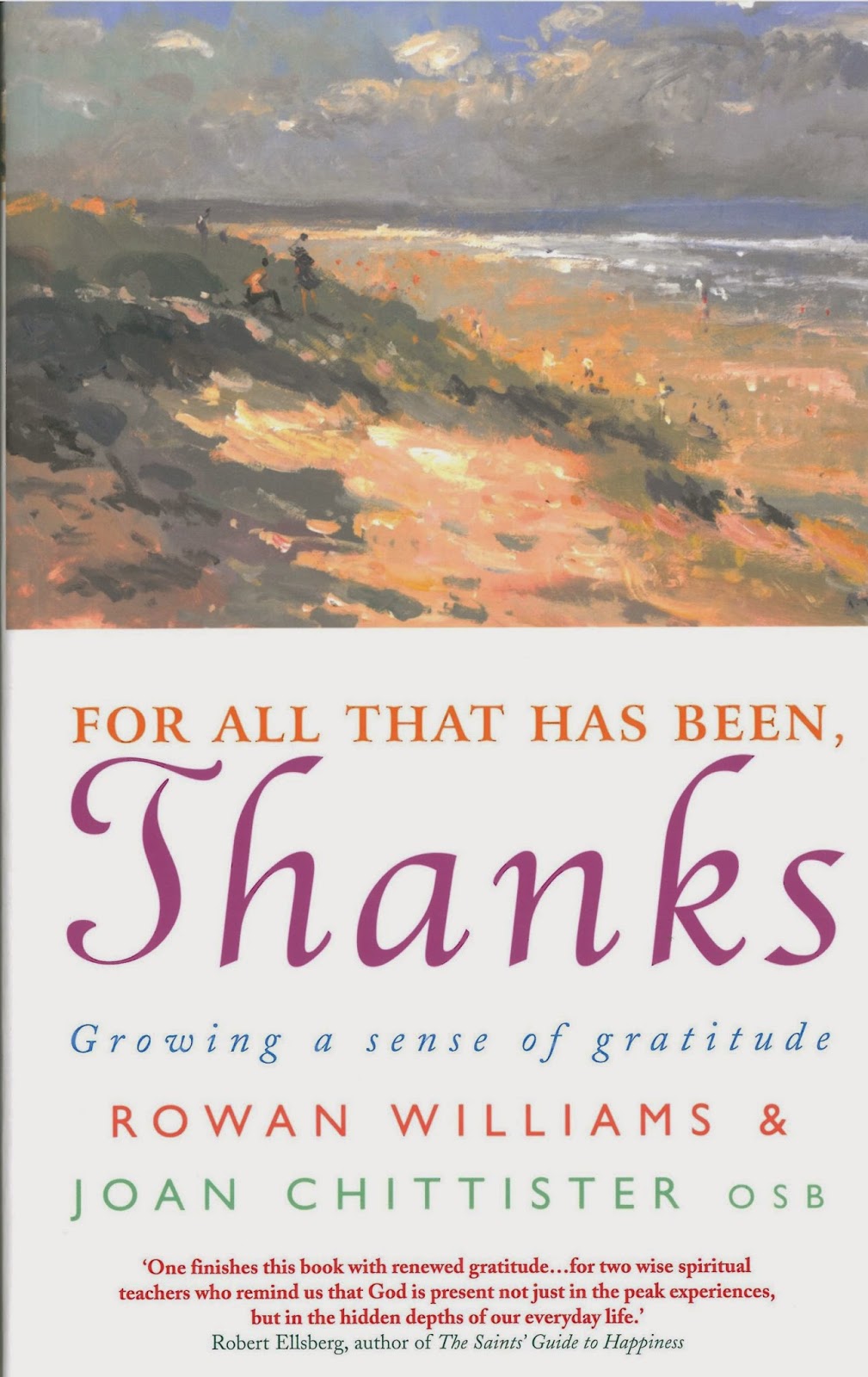 Why should we be grateful for our lives when there is no-one to be grateful to? Why, but also: How can it even make sense for us to think of being grateful (or ungrateful) for our lives in this condition? The questions receive ready answers within a religious context (cf Rowan Williams' and Joan Chichester's For All That Has Been, Thanks) - which tell us that there is someone to be grateful to. But what if we're unbelievers? Must we forswear the idea of life as a gift, refuse to see life under the aspect of grace, if we forswear the idea of a giver, of a gracious one? Yet doesn't it seem important to at least some of us unbelievers, to be able to hold onto the idea of grace, without the obvious alternative of going shamanic (i.e. without ancestor worshipping, where the idea is that who we should really be grateful to for our life is our parents and their parents and their parents etc.), without capitulating to theism, and without saying 'well actually we shouldn't be grateful'. My friend Michael has recently been writing, and making me think, about these things. I thought I'd try to forge my own perspective here.

As for the first question, I want to suggest that we should be grateful for that which we have but did not earn. True I did not, as the teenager likes to point out, ask to be born or to be sustained in my molecular make up etc etc. Yet someone who asks 'but why should we be grateful for what we have but did not earn?' is, I think, not asking a reasonable question. Not understanding that one ought to be grateful here is just not understanding the moral meaning of existential gratitude. They are like someone asking 'But give me a reason to believe that a bachelor is an unmarried man'; such a person does not need reasons to believe in a putative fact - what they need is a dictionary. To put it differently: it seems to me that the connection between gratitude and the unearned good is conceptually internal rather than external: a sense of gratitude just is the moral-emotional form taken by an acknowledgement of the unearned good.

We can also imagine someone asking or wanting to answer the question not so much with the felt need for an epistemic justification in mind, but rather with a valued consequence in sight. They might say 'Well, you should be grateful because, don't you know, modern psychological science tells us that grateful people are happier and live longer and have better relationships.' Perhaps lazily I hope it's just obvious to the reader why that kind of consequentialism is simply banalising and morally distasteful; at least, I can't really bear to argue against it here.

Anyway, the second question is I think the more interesting one. In a way it puts some pressure on the idea that gratitude just is the form that an acknowledgement of unearned goods takes by encouraging us to make some distinctions. For example, the sceptic here might say 'Well, we might wonder at the unearned good, be delighted by it, and so on. But to talk of gratitude here is to project an essentially human-to-human response onto an impersonal situation. We are necessarily grateful only to givers, and here we have none. To hope as you do above that talk of 'grace' isn't appallingly naive in a non-religious context is absurd. Gratitude makes no more sense than being angry when natural disasters happen. It might be a psychological inevitability but its a moral-emotional absurdity.' Hmmmm…

Against this sceptic I think I wish, ultimately, to simply turn my face. … 'When I say 'life is a gift', I know full well, thank you very much, that there is no giver. Clearly I am, therefore, using the word 'gift' in a slightly non-standard way, to mark something essential about my relation to the object rather than the object's relation to a donor. We both see that; I saw it already, so don't feel smug about pointing it out thank you very much.' … What then is it that gives the language-game of grace its point in a non-religious context? Well, perhaps what gives it its point is the chronic and endemic human tendency to take our lives and their contexts for granted. Heidegger puts it very well in his essay on technology: the Gestell or enframing of technology is so pervasive, in how it focuses all our attention on what we can control or create, that it occludes from us the simple fact of the uncontrollable 'presencing' of beings, the fact that every bit of activity from us rests on something that isn't within the scope of our will. The car we use to make our heist is always a gift; the metals we use to make our spaceships were waiting for us, uncreated by us, in the body of the earth. Legal frameworks too may encourage us to think merely in terms of our rights, our entitlements, leaving out of consideration the radical ways in which we aren't coherently said to be entitled or unentitled to our lives or bodies. The reason why it makes sense for us to talk of gratitude is because our lives are inexorably marked by narcissism: this gives the language game its point.

Sure, I can imagine someone being sentimental with gratitude for their life. (Similarly, someone who never got angry when bad things happen could be suspected of moral superiority. As it happens, reminding ourselves of what we have that isn't earned or even earnable can be not just humbling but also soothing - rather like walking over mountains or staring at oceans or the night sky can be soothing as we come to feel our radical insignificance and contingency. But we do better to cultivate it simply because it is called for, rather than because it is anxiolytic or even because it is soteriologically effective: such rationales do rather bring it all back down to ourselves again!) There is, however, no necessary sentimentality in this kind of existential gratitude, or so it seems to me. I would probably not ever be having a lived experience of such gratitude if I were able to forswear my narcissism, if I lived in such a way as to always grasp and know my own dependency. But lets face it, that's not likely to happen any time soon… Such narcissism is always and everywhere a standing concern for us (witness the way it gets presupposed in abortion debates when people say things like 'my body is my property'. Your - anyone's! - property: really?!).

Throughout this post I have been talking of a 'non-religious' use of the notion of grace. Another way of thinking about these matters, however, would be to claim to derive our sense of what counts as 'religious' from our appreciation of the sense of these issues, rather than to presuppose that we know what is meant by talk of 'divine grace' first and foremost in some unworldly, theoretical sense. I haven't settled on a view as to the right way to theorise the religious language here. All I know is that when people talk of being 'spiritual but not religious' it usually makes me cringe, since the notion of what it is to be 'spiritual' on the table here often seems itself rather narcissistic (for example, to be first and foremost about something called my own 'inner journey' - rather than, first and foremost, about the central human matter of how to relate to others open-heartedly). Yet again there's so very often something equally narcissistic about the self-satisfied certainty that adherence to a set of religious beliefs about how and why to act can give.

At any rate, if I am right, perhaps this is a gospel that can be stomached by both the godless and the godly.

As Braver reads the early Wittgenstein, here we have a philosopher who sees attempts to become happy by achieving our desires as a 'sucker's game', since the world is always changing and is largely out of our control. As one of Braver's many lovely metaphors has it 'The dice are loaded - determined, even - and the house always wins in the end. Even the most fortunate face the inescapable sufferings endemic to human life.' And so we do best - in Schopenhauerian, Buddhistic mode - to withdraw from the game, quiet the will, accept how things turn out, rise above the 'circulation of pleasures and pains', disidentify with the desirous and dying body, and see the world sub specie aeterni. In this way one becomes 'absolutely safe': nothing can harm you - nothing can even befall you - since who you are is not something which sets itself over against what can happen. The Ego Ideal collapses back into the Ego.

In an earlier section of the book Braver describes the commonalities between the early Heidegger and the later Wittgenstein on the significance of absorbed coping, praxis, automaticity, the tacit, the ready-to-hand. If we lose sight of this we wrongly project the form of attention and thought deployed in philosophical reasoning - disengaged, reflective, contemplative, calculative, present-at-hand - onto our basic epistemic situation - and thereby generate unnecessarily for ourselves a whole host of sceptical problematics and banalising and intellectualised versions of the human condition. But as Braver also notes, whilst the first half of Being and Time constitutes a paean to Dasein's praxical immersedness, the latter half praises the authentic moment of choice when I pull back from an automated immersion in taken-for-granted communal structures of meaning, and make a decision regarding how myself to live, what to do, coming off auto-pilot: becoming a pure moment of will. So whereas 'Wittgenstein warns us against willing, Heidegger presses it upon us, echoing Kierkegaard's Judge William's exhortation to make the most fundamental choice - choosing to choose, to make decisions deliberately rather than coasting on the inertia of our community and our past'.

In this chapter Braver offers us no reconciliation. But we need one, don't we? We've all met people who are so radically afflicted by passive merely-watching-their-life will-less-ness, or by angry omnipotent will-full-ness (and we all have moments of these ourselves) that they either don't really exist or live a life of futile frustration! And the answer surely isn't some banal 'everything in moderation' or vapid hodgepodge - some humdrum bio-psycho-socio-spirituo gooey fudge for the soul.

The answer, as I see it, comes from the stoics. The fundamental question to be asked, in any situation, is: What is, and what is not, within the purview of my will? To what must I reconcile myself, and yet about what can I act? How can I be clear about this, not engage in shadow boxing but be no more passive than is required? In this way we can achieve the fullness of agency that comes from seizing what can be seized, and the releasement (Gelassenheit) that comes from not railing narcissistically against the gods. These two are in fact radically complementary: when I stop directing my energy into futile tantrums against the inevitable I have all the more of it available for fruitfully and rewardingly actively discharging my duties to myself and to others. And psychodynamic psychotherapy adds a further inflection. When it comes to the inner world, what enables us to engage in courageous action is first to take the courage to put down defences and in-actively suffer, simply absorb the living meaning of, feel, our feelings - feelings being our most fundamental manner of grasping the meaning of the changes in our relationships, prospects and projects.
'Feel and deal' is how Diana Fosha pithily puts it.