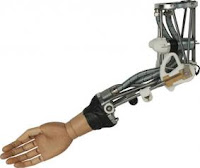 628. So one might say: voluntary movement is marked by the absence of surprise. And now I do not mean you to ask "But why isn't one surprised here?"

In these later paragraphs of part I of the Investigations Wittgenstein explores the idea that what may be 'left over' when I subtract arm rising from arm raising are a set of kinesthetic sensations that are equivalent to an act of willing. There is no evidence that he intends to take his own question seriously (to suppose so would miss the entire ironic tone of the entire Investigations), any more than he wishes to take the answer seriously. For what he appears to wish to reach is a point where the question 'how do I know that I raised my arm?' when I raised it has no traction for him. Where its own roots in an estranged conception of the human subject can be exposed, and the question laid to rest.

The person who has such a relationship with their body has clearly become alienated from it. They, perhaps, have become an interiorised will-er of exteriorised actions. No longer identical with their own living bodies, they become the intender of their bodies' movements and the perceiver of the consequences of these movements.

But wouldn't this be misguided? Might instead it not be the case that there is no reason why we are not normally surprised when, raising our arms, our arms rise. We might say: We are not surprised just because we are raising our arms ... which is of course not to answer the question but just to re-state one part of it - although it is nevertheless (I am suggesting) the only answer that could be given.

The notion that knowledge amounts to an identity relation between a subject and an object sometimes surfaces in the history of philosophy. It never appears terribly plausible when stated quite so baldly. But the present case provides us with the kind of example that might have inspired its original formulation. When I am raising my arm, my knowledge that I am raising my arm is nothing other than my raising my arm. I do not know it on the basis of anything. The 'how' question ('how do you know?) gains no traction. My knowledge and my arm raising are of a piece with one another. There is then no need for the assigning of epistemic intermediaries - sensations, conative introspection, etc. - to fulfil this mythical function for us. There is no need to posit some supposedly self-evident - but actually redundant - immediate experience of self-agency. No need to posit some 'ipseity' by means of which our consciousness supposedly knows itself.

We are not surprised because no malfunction has occurred. Arm raising is happening as it should. When it happens thus I the knower am of a piece with I the bodily agent. In exceptional cases the two may come apart. Sometimes I may be surprised by my body's movements, in which case I am not their agent (although we might need to do some fancy conceptual footwork to accommodate John Hyman's nice example of (from memory) a violinist being surprised when they pull off a particularly difficult performance without hiccup). On the whole, I am not. And why should I be - since my knowledge and my action, my anticipation and my intention, are of a piece with one another.

Someone might ask why I am blathering on about this in a blog about the philosophy of psychopathology. The reason is simple: It is tempting, when confronted with cases of, say, 'made action' (passivity experiences of the body) in schizophrenia, to imagine that here we have a case of self-consciousness gone awry. As if there is some normal psychological mechanism which affords us access to our own bodily intentions, and on the basis of which we can reliably anticipate our own actions. Whatever the strengths of such an account (like Chris Frith's) at a purely subpersonal level (using notions like 'intention' in 'motor intention' in a metaphorical sense in neuropsychological discussion), there are, I believe, no such merits to be gleaned at the personal level.

By demonstrating alleged philosophical ingenuity and developing an 'account' of 'agential self-consciousness' which posits a inner act of self-consciousness which allegedly makes possible our normal self-anticipation, the philosopher appears to be in a position of ingeniously explaining 'what goes wrong' in the psychopathological case. Schizophrenic passivity experiences get explained in terms of a lack of the phenomenal experience of 'ipseity' or what have you. The costs of this: the falsification of the grammar and phenomenology of everyday intentional action, and the making-too-much-sense of the necessarily-bizarre phenomenon of passivity experiences themselves, simply go un-noticed.
Posted by Richard Gipps